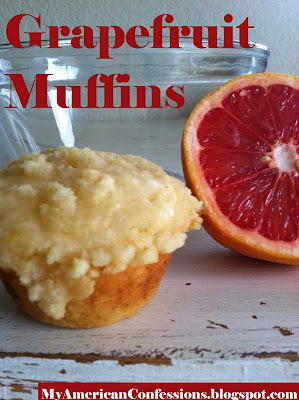 I was in muffin mode today, baking a whole passel of muffins. I like to bake a few dozen, freeze them, and then thaw a few when I'm in the mood for a homemade muffin. And as I was making all of my favorites like apple cinnamon and pumpkin chocolate chip, I noticed a few grapefruits in my fruit bowl on the table. And I thought, "Hmmmm, why not? Can't be much different than lemon muffins, right?" So, I jerry-rigged a grapefruit muffin recipe together. I couldn't resist popping a piece into my mouth right as they came out of the oven. Well worth a bit of singed tongue. They were delicious! Allow me to share my moment of inspiration with you.

Step 1
(preheat oven to 400) Mix dry ingredients  together thoroughly in one large bowl.

Step 2
Mix wet ingredients together thoroughly in a smaller bowl.

Step 3
Pour the mixed wet ingredients into the large bowl and combine with a few strokes up a wooden spoon- just enough so that it is mixed together- lumps are ok!

Step 4
Pour batter into a muffin tin that is greased or lined with paper cups. Use spray grease on the top portion of the pan. Make sure that the batter goes almost to the top of each cup- you WANT them to fluff up over the top when they are baking.

Step 5
In a small bowl, mix the flour, sugar, and butter from the streusel topping all together. It should be the consistency of crumbly cookie dough. Sprinkle it generously over the top of the muffin batter in each cup, making sure to NOT get any on the top part of the muffin tin.

Step 6
Bake at 400 for 15-18 minutes (or when toothpick inserted in center comes out clean). Allow to cool a couple of minutes until they are warm and not hot- then pop them out of the tin and into your mouth! They are delicious!!
Posted by American at 2:32 PM No comments: 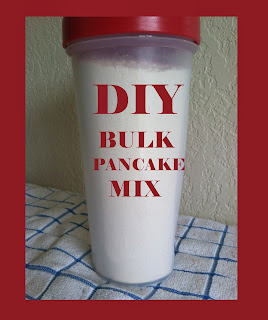 Why pay for a pancake mix at the store when you can pre-mix it in bulk (at less than half the cost of name brand pancake mix) and have it ready to go anytime? WHY?!?! Ain't no reason. Follow these easy-to-make mix instructions and save some money on breakfast!

Step 1
Mix all the dry ingredients together and seal in an air-tight jar/container. The end! Follow the table for mixing instructions.

This is included in my Christmas on the Cheap project because it can make for great neighbor gifts! Throw a bag of chocolate chips into your dry mix, then parcel out into mason jars, which you can decorate and pass out to neighbors, teachers, etc.
As part of my Christmas on the Cheap project, please note:Cost:  1.75 per gift
9 Cups Dry mix (with bag of chocolate chips): 4.50
This was just how much my groceries cost me- you can get it cheaper, I am sure.
4 Mason Jars (from Goodwill): 2.00
Lids and Ring for 4 Jars: .50
Time: 10 minutes (plus decorating time) 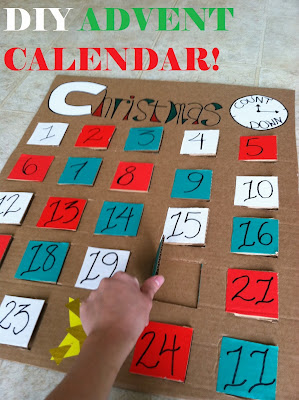 I made a paper and felt advent calendar last year, but it was not as durable as I would have hoped, causing me to re-invent my advent calendar this year. Thanks to a large cardboard box, my little project didn't put me out a dime, as I already had paper and glue on hand.


(Trying to save on your Christmas budget? Try 5 Ways to get Free Money for Christmas!)

Cost: Under .99
Assuming that you have cardboard, scissors, box cutter, glue, markers, etc., already lying around, 50 sheets of origami paper runs about one dollar, so 12 sheets or so should put you out less than a buck.
Time: 60 minutes

Lay one piece of cardboard on top of the other and make sure they are the same size. Use a box cutter to make any adjustments. 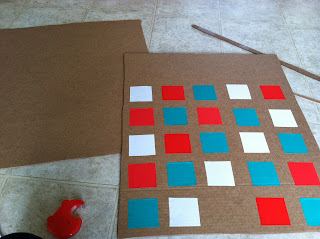 Step 2 (make little squares)
Fold the green, red, and two sheets of the white origami paper into quarters and then cut along the fold lines, so that you will have 12 small red squares, 12 small green squares, and 9 small white squares.


Step 3 (glue 'em down)
Using the glue stick, glue twenty four of the squares in five columns with rows of five, leaving a gap in the third column of the fifth row and a space of about eight inches at the top. (see picture)

Use the yellow origami paper to make some kind of star or special shape for the empty space in the third column of the fifth row (the marker for December 25, Christmas Day....)

Using the box cutter, carefully cut around each square of paper along the top, right, and bottom sides, allowing the left side to remain fully attached so that it can act like a sort of hinge. Make sure that each cut goes completely through the cardboard so that it can open like a door.

Step 6 (glue cardboard together)
Using the bottle of glue, spread glue on the second, blank piece of cardboard. Put glue ONLY along about eight inches of the top and then a thing line along the left side, right side, and the bottom. (you don't want glue where the little doors are suppose to open). Put the first piece of cardboard on top of the second and press down everywhere you have applied glue, ensuring good contact. Allow to dry.

Step 7 (making hinges)
Make the little doors open-able! Press your scissors along the fold/hinge line on the left of each piece of paper and pull the door open.

Step 8 (decor)
Decorate! Use the remaining paper to create your own version of "Christmas Countdown". I made a little clock.... So inventive, right? Number each square for each of the 24 days before Christmas. (look closely- clearly my college education has done me nothing- I accidentally skipped number eleven, so my number eleven is at the bottom right of my calendar....)

Step 9 (fill 'er up)
Figure out a list of activities/games/treats for your countdown (my DIY Advent Calendar  from last year includes a list of ideas) and then write each day's activity on a small piece of paper, then stick it behind your little 'door'. Now you are ready for a super-exciting morning every morning before Christmas! (That is, if you have super exciting activities....) Have a Merry Christmas!
Posted by American at 1:15 PM No comments: 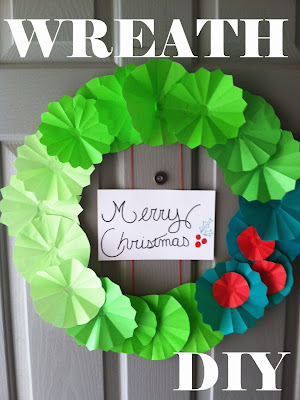 I must say, I was incredibly pleased with how this turned out. All I knew when I started out was that I wanted to make a wreath for my door- and look at what I ended up with! I used greens and a few small red shapes in order to make a modern mock-holly wreath. Feel free to use whatever colors or schemes bring you a smile.
(Trying to save on your Christmas budget? Try 5 Ways to get Free Money for Christmas!)


Cost:    Under .99
Assumption that you have cardboard, scissors, box cutter, glue, markers, etc., already lying around. 50 sheets of origami paper runs about one dollar, so 20 sheets or so should put you out less than a buck.
Time:    60-90 minutes, depending on size

Step 1
Cut a two-ish thick ring from your cardboard using the box cutter. It's your wreath- make it as large or small as you'd like- but it looks best at about two inches wide. I just moved and had more cardboard than I knew what to do with. Mine is plain cardboard, but if you have some with writing or markered words on it, no problem! And don't worry about it being perfect or even- you can see my is clearly far from a perfect circle. You will be covering the entire thing up with decor, so don't worry about the shape or colors on it too much.

Step 2
Fold an origami sheet in half, then half again, (should be square shaped) then into a triangle, and then fold that triangle in half so that you have a very skinny acute triangle. Make a round cut (for a scalloped edge) or two straight cutes (for a pointed edge) to the outer most edge, away from the folds. Unfold, but don't flatten out the creases. Repeat 12-24 times (as needed to cover your cardboard wreath.) Want smaller shapes? Cut the origami sheet in quarters and follow the same process.

Step 3
Arrange the shapes around your wreath in a design/pattern/color scheme you like. Move things around, try closer bunching, gradient color schemes, or spacing them out. Just find a configuration that is pleasing to the eye. (Namely, your eye, that is.)


Step 4
Apply the shapes to your cardboard ring with just a dot of glue on the back center of the shape and then press down firmly. Allow the shapes to overlap each other.

Step 5
Using your half sheet of cardstock and markers, write a festive message to all who might come to visit! Attach to your wreath by taping your floss/yarn across the back of your message and then taping the ends of the floss/yarn to the back of your cardboard wreath. (See photo- I used four small pieces of floss, but in retrospect, it is simpler to use two equal lengths of floss)

Step 6
Hang that bad boy on your door to let all the world know you have Christmas cheer!