Why I Served a Mission: I Planned to Give but Received Instead 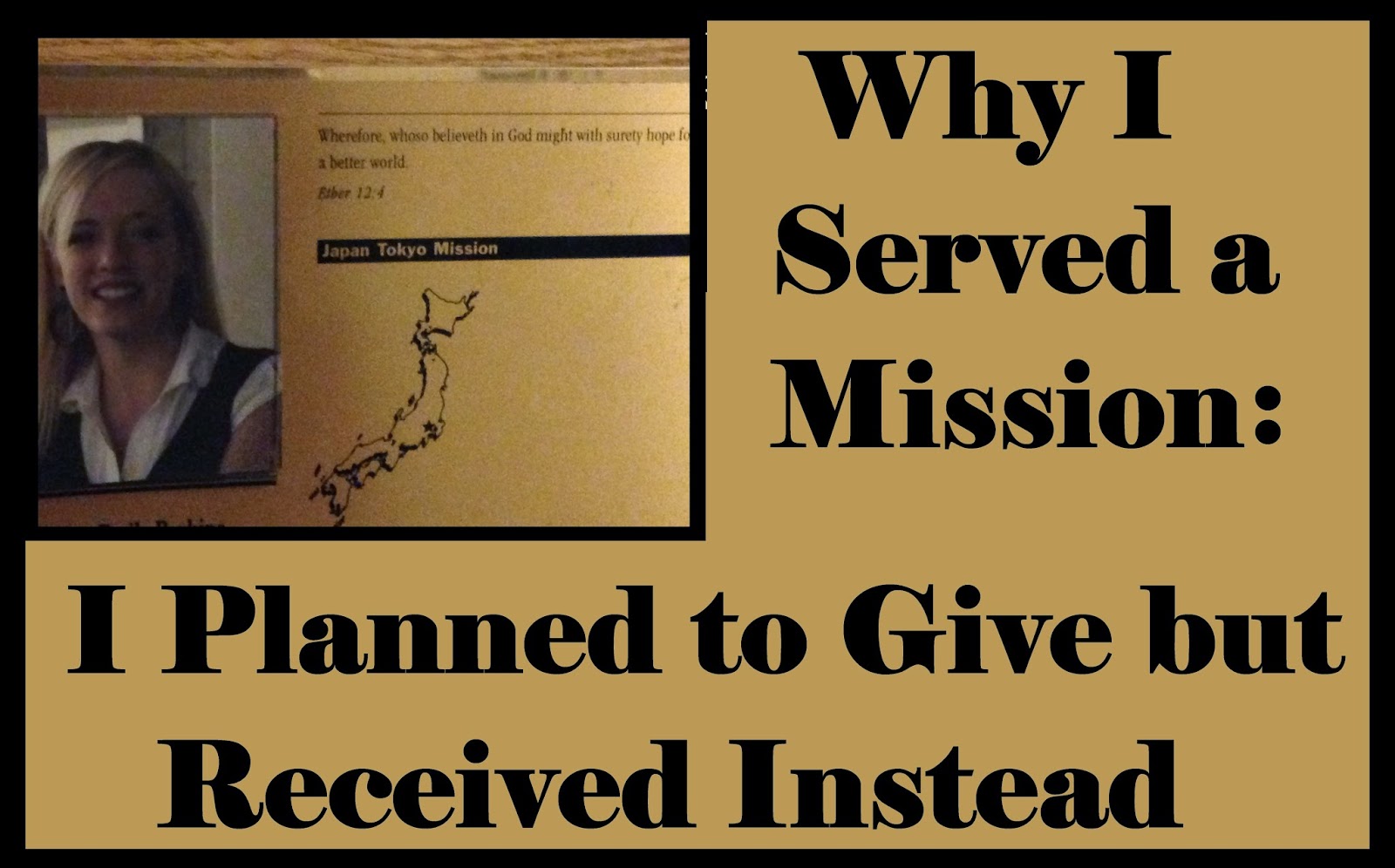 I am a Mormon- LDS- a member of the Church of Jesus Christ of Latter Day Saints. From a very early age, I would often be asked, "Are you planning on serving a mission? You'd be so great! You would make an awesome missionary!" or some variation to that effect. I took these comments as an insult. My personal image of female missionaries was far from positive and I took no pleasure in others grouping me in with them. So, needless to say, I hadn't the slightest desire to serve a mission. Very near to my 21st birthday, my heart and mind seemed to be softened somewhat to the idea. Not entirely- but just enough. As I thought on serving a mission, I heard a talk that resonated with me.  The heart of this talk was good vs. better vs. best. What I walked away with after listening to it was to consider a mission in those terms. I thought to myself, 'what was a good thing a could do? A better thing? The BEST thing?' After debating with myself, I concl
uded that serving a mission would be the best thing I could do for a number of reasons.


-In no way would it prevent me from my other future desires. I could still finish my degree in college, get married, have children, travel, and do anything else I wanted in life. Clearly, it would not be an inconvenience for me.

-I had the means (through generous parents) of serving a mission without worrying about funds.

-I had been given so much- certainly I could give back. I had an understanding of the gospel. I had a strong, outgoing personality. I was friendly. I had no problems sharing my testimony. I understood the scriptures. I could perform hard physical labor. I was easy to live with. I could cook well. I took care of myself. I just knew that I would put a good face on the church. I learned languages quickly.Surely, if the Lord had blessed me with so much, it wouldn't kill me to share some of my blessings back on his behalf for a mere 18 months? My entire thought process was along the lines of 'because I have been given much, I too must give'.

And that was where I ended up being dead wrong.

I was called to serve a mission in Tokyo, Japan. I served my 18 months honorably, excelled at the language and working with the people. I felt I had accomplished what the Lord had sent me to do and that He was well pleased with me. I had done exactly what I had set out to accomplish on my mission. I had blessed the church and the work of the Lord through my talents.

Never, when I left on my mission, did I realized how much I would receive! Never! My thoughts had, pridefully, I'll admit, been only on my own talents and gifts and how I would be able to give back to the church. I was woefully unaware of the huge amount of blessings that I would receive. More than I had room to receive! And so undeservingly!

It can be compared to volunteering abroad with a program where you paid your own way. You used your time, your funds, your talents, and were totally fine with giving on behalf of a good cause. Then, when you returned home from your non-profit project, you found out that several million dollars had been transferred to your bank account, non-refundable, for the work that you had done. And what's more, the cash continued to flow into your account, millions a year, for the rest of your life. Surely the small amount of work you had done over a brief period of time was not worth so much- and yet, you continued to receive.

That was how my mission has been for me.  Want specifics? Here goes.

FISCALLY. Because of my mission, I have been able to be a stay at home mom. I certainly had the desire to stay at home with my children as soon as I became a mother, but my husband didn't make enough money for that to be a possibility. However, on my mission, I learned Japanese and now work as a Japanese translator- work that can be done at home, during nap times, and has always been enough to cover our expenses so that I can stay home.

MENTALLY. I had been a hard-working, high- scoring student for my entire life. Yet somehow, in learning to study the language and the scriptures on my mission, my mental capacities were boosted to a height I didn't realize was even possible. I had the ability to study, learn, and apply principles far more effectively than ever before.

SPIRITUAL MATURITY. Naturally, I grew spiritually to a great degree. But more than that, I learned true charity and what it feels like to work under the influence of the Spirit. Not the infrequent, far-between experiences I had had before I left on my mission. But what it felt to be truly guided by the Lord in my actions. Being able to recognize that as a missionary has allowed me to know when it is missing from my post-mission life and has shown me what I need to do to regain it.

PARENTING. I can recognize on almost a daily basis how serving a mission has allowed me to be a better mother than I would have been had I not served. I have greater patience for my children's antics. I have greater emotional control when they test me. And I have a clearer mindset for what the most important things are for my children to learn, something that is very dear to me. They must know that I love them, that their Savior loves them, and that He is available to them always. Certainly something I knew before I ever served a mission, but something that is indelibly imprinted in my mind now in a way that surely would have taken decades to obtain.

WIFING. I don't know if I could even count the number of times I have recognized a marital issue and then handled it better because of things I learned on my mission. This heading alone would have been reason enough to serve. Being married isn't easy, but oh, my, how much easier and more rewarding is it because of my service.

In all of these topics, I have spoken in generalities, for brevity's sake. Allow me to interject a single example of how one experience specifically blessed me for years and years to follow as a wife.

I had difficulties with one of my companions. They were unkind to me and it was difficult to not show a growing resentment. During this time, however, I read this talk by Elder Holland. In it, I felt extremely impressed to not allow a single word of unkindness come out of my mouth. Again, this was a trying time for me. But miraculously, through prayer and an increased ability from the Lord, I never voiced unkind words for this companion, regardless of their actions towards me. This was an incredibly difficult life skill to master, but I have used it time and time again in my marriage to bite back angry words. Every time, once a day or two has passed, and I re-visit my unkind thoughts. I can only thank the Lord that I did not speak them to my husband because, guess what? When I'm angry, I think mean things that I truly don't mean! What a boon to be able to not speak every word that crosses my mind. This skill alone was worth serving a mission.

HUMILITY. PATIENCE. EMOTIONALLY. I could go on and on and on. The ways in which I have been blessed for my service are almost countless.

And so in that I was wrong- I thought that me serving a mission would be a great boon to all who came in contact with me. Instead, I was blessed, loved, and continue to be blessed in far greater measures than I could ever have imagined. 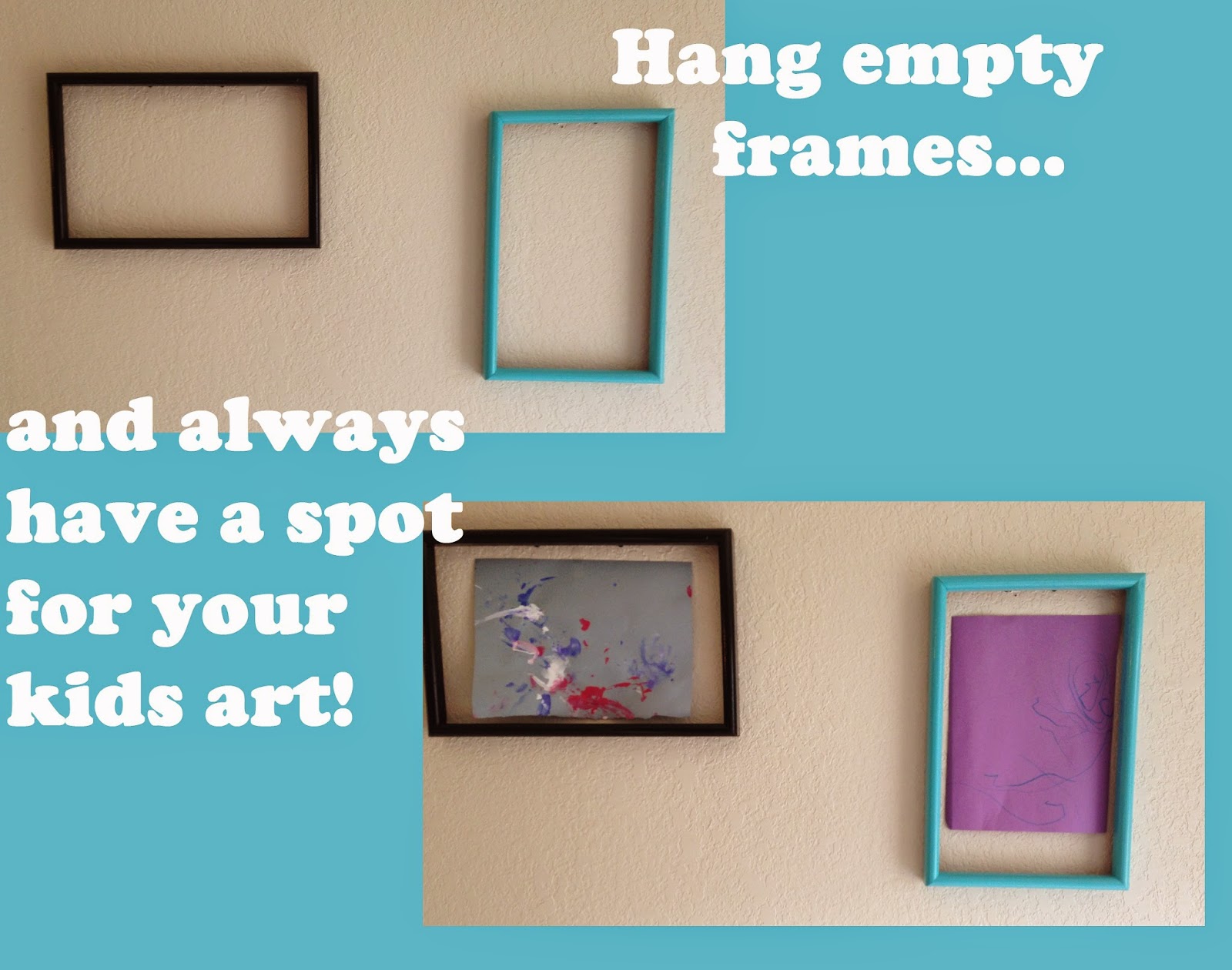 Here's an easy one- go to a thrift store, buy some picture frames, then paint them to match your decor. Next, hang those frames, empty and without glass, on your wall. Next time your child creates a masterpiece, you can temporarily 'frame' it by simply sticking it to the wall with a piece of tape. It's an exciting thing for your kids to see their art 'framed', and it's a bit more stylish than papers on on the fridge. Easy!

If you're interested in wall art that is personalized to your taste but perhaps a bit more chic and couture than just hanging your kids drawings, head over to Shutterfly for personalized  wall art options!

Posted by American at 8:01 PM No comments: